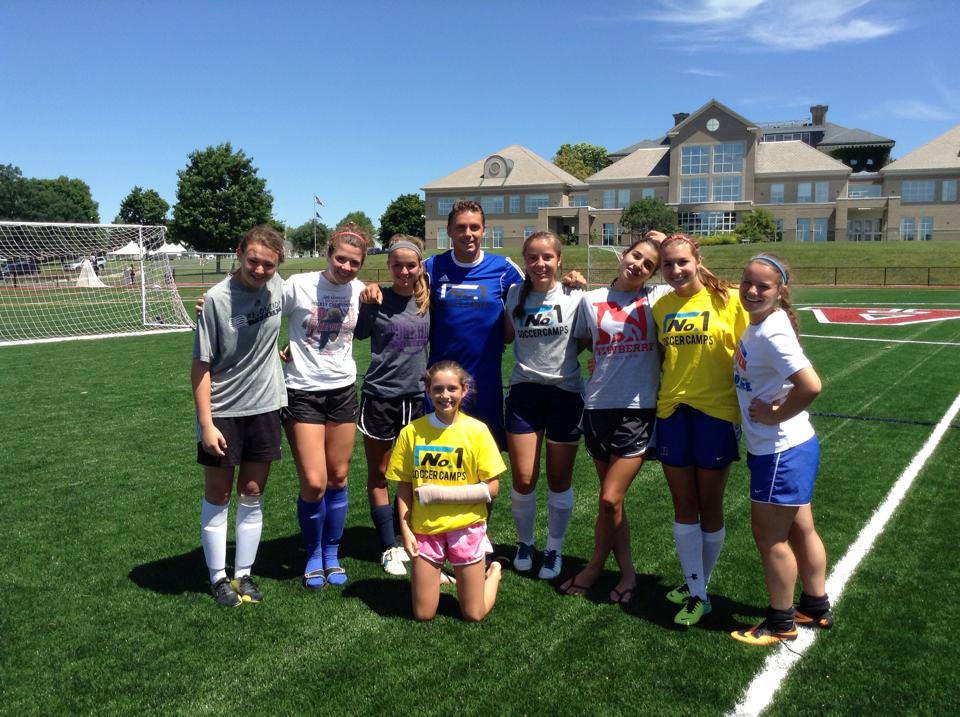 No. 1 Soccer Camps Staff Coach Jordan Nendza was a four year starter at Lebanon Valley College. In her senior year she was named to NSCAA Division III Women’s All-Mid-Atlantic team as well as All Conference Second Team,  as well as MVP and Team Captain for LVC.  She will be receiving her Doctorate in Physical therapy in May and coaching at  No. 1 Soccer Camps’ Lebanon Valley College location in Annville, PA in July. We sat down with Jordan and asked her a few questions about her experiences as a player and coach.

No. 1: How long have you been playing soccer?
Nendza: I have played since the age of 4. I am now 24. 20 years!
No. 1: How often do you train?
Nendza: When I was in college we trained every day during the season and then sporadically throughout the off season – maybe 2 times per week.
No. 1: As a collegiate player, how would you prepare for a big game?
Nendza: I think a lot of my preparation was mental.  I always picked a technical skill that I would try to be perfect at during the game.  I also did a lot of player scouting and would be prepared for the match ups that my team-mates and I would be responsible for.
No. 1: What is your greatness moment as a player?
Nendza: Qualifying for the NCAA tournament my senior year in college.  We were the first team in Women’s Soccer history at LVC to make it to playoffs, and Messiah is in our conference, who always places in the NCAA tournament, so it’s more difficult for us to get in.
No. 1: As a player, do you have any pregame rituals?
Nendza: I would eat a snack bag full of M&M’s about 2 hours before every game and save the yellow ones for a team-mate.  I never ate the yellow ones. I also had a specific way of putting on all my gear and putting my hair up. Always started with the right foot, and did one layer at a time.  My hair I’d only use one of my hair ties until we pulled off our warm ups and put on our jerseys, then I’d add my second hair tie right before stepping onto the field.
No. 1: What was your favorite place you have played?
Nendza: I think being able to travel out to Ohio for the NCAA tournament my senior year in college was probably the coolest place I have ever played.
No. 1: What was the biggest game you ever played in?
Nendza: In high school I was in a state finals game that was played in the Hershey Stadium and broadcasted on Comcast’s PA station.  I was a sophomore that got pulled up for playoffs that season and the coach had used me occasionally through leagues and districts, but threw me in within the first 15 minutes of the state finals game and didn’t take me out the rest of the game.  I actually ended up scoring an own goal that game and we lost, but it was definitely the biggest game I’ve ever been in.
No. 1: What is your greatness moment as a coach?
Nendza: I think my greatest moment as a coach was watching my U8 team play against a team much better than them in a tournament last year.  They were getting beat 6 or 7-0 and every single one of them kept their heads up, continued to make calm good decisions as to whether to pass, dribble or shoot, and they all came off the field at the end of the game telling me how much fun they had, regardless of the score.  I think it’s really important to love your sport, not just love to win.
Staff Coach Nendza will be at No. 1 Soccer Camps Lebanon Valley Location July 27 – 31. For more information about the the LVC site and No. 1 Soccer Camps, click here.