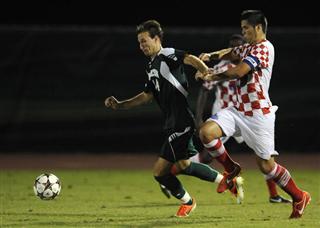 Wes Sever was a four year starter at George Mason University and a current No. 1 Soccer Camps Staff Coach from Belleair, Florida. Wes finished up his senior season at GMU last fall where he tied for the team lead with five goals and had four goals in the first three games of the season – three of which were game-winning goals.  His final goal of this collegiate career came against William & Mary in the first round of the NCAA Men’s Soccer Championship. Wes answered a few questions about life as a D1 Striker, winning your conference championship and playing in the NCAA tournament.

Q: As a former US Soccer Academy Player and a successful Division 1 player and striker, how important is it to spend time by yourself in front of the goal, getting comfortable with your shot?
Sever: As a striker, it is your job to score goals. With any skill the more practice and repetition you have, the better you will be at it and the more comfortable and confident you will be. As a striker, it is also important to be able to score all types of goals. Therefore you should spend time working on different situations over and over and over again. A lot of times you may not get the time you need in practice with your team, so it’s important to find time to do this on your own

Q: What was your experience like winning your conference championship and playing in the NCAA Tournament?

Sever:  Winning the Conference Championship and Playing in the NCAA tournament has been the highlight of my soccer career thus far. To play against quality teams and get results after years of preparation and tough training sessions, there is no greater feeling – especially to share those moments with your teammates and coaches. Winning Championships and being nationally ranked forms bonds with your teammates that will last forever.  It was also very exciting to travel all over the country, see new places, and do it with my closest friends while playing the sport I love.

Wes Sever is a Staff Coach at No. 1 Soccer Camps Salisbury and Vero Beach locations.