About No. 1 Soccer Camps

To provide the most valuable experience possible using instruction and positive reinforcement in match related games and situations regardless of which side of the ball the camper plays on in a mutually satisfying atmosphere where learning takes place in a spirit of camaraderie; goalkeeper and striker, boy and girl, staff coach and camper, fostering soccer development and the encouragement of an appreciation of soccers intrinsic values.

Since 1977 under the direction of former college, professional and World Cup coach Joe Machnik, No.1 Soccer Camps has become the most trusted name in soccer camps.

That first year, Machnik started the No.1 Goalkeeper’s Camp with 39 goalkeepers from thirteen states participating in a one week session. Coaches John Kowalski, Shep and Roy Messing, Mickey Cohen, Peter Johnson and Danny Gaspar joined Machnik in putting the young goalkeepers through their paces.

By 1995, it became evident that goalkeepers had progressed in technical areas, but tactical decision making abilities, which could only be tested by field players in match situations was missing. In addition, the lack of goal-scoring abilities was rampant in America and a striker’s curriculum was needed to provide players with opportunity to enhance technique and composure in front of the goal.

Accordingly, Machnik and Kowalski incorporated field players into the No.1 Soccer Camps program with the addition of the Star Striker’s School which was the forerunner of the No. 1 Striker Camp program. Within no time, field players came from all over the country and the world to attend the unique No. 1 Soccer Camps program. Machnik and his experienced professional staff continue to refine the program and update the methodology utilized to get results on both sides of the ball. In 2016, in response to age group and field size mandates from US Soccer, No. 1 Soccer Camps responded with steps to assist players and teams throughout this important transition.

In 1996, Sports Illustrated for Kids named No.1 Camps the TOP CAMP in the country.

With over 85,000 satisfied No.1 Campers, the list is countless as to the numbers that have played at the highest levels of intercollegiate soccer on athletic scholarships, as well as, in USA U17 and U20 programs for both men and women, and in the NPSL, MISL, USL, MLS and WPS. 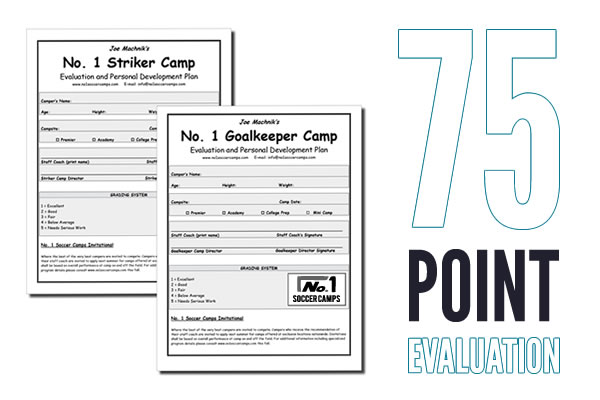 On the last day of camp, each camper will receive a written 75 point evaluation specific to either the Goalkeeper or Striker Camp. This evaluation has been a staple of No.1 Soccer Camps since its inception and is the most in depth detailed soccer camp evaluation you will find. No. 1 Soccer Camps and its staff take great pride in the quality of each camper’s evaluation and the Personal Development Plan offering post camp advice for the further enhancement of each camper’s abilities. Campers and parents have the opportunity to review and discuss the evaluation with the camper’s staff coach at the end of camp creating a positive conclusion to camp’s training.

© 2023 Copyright by No1soccercamps. All rights reserved. Powered by