I recently sat down to coffee with a mentor of mine, and we spoke at length about the position that is near and dear to both of our hearts: the most important position on the field, the goalkeeper (spoken like a true GK, I know).

We spent a majority of our time discussing the emergence of the spread/block breakaway save that is making its way through the professional and collegiate ranks. Below is a photo of Joe Hart, one of the best at this technique in the world. I expressed my naiveté to the training of the technique, as I never was taught nor used it growing up. We talked about the strengths of the technique and the weaknesses and how we think it should best be handled moving forward with our No. 1 goalkeeper curriculum. When I was learning breakaway saves, and particularly those that break to a semi-lateral position which the spread save is mostly used for, we were taught an array of techniques from the “cobra” block save with our forearms, to the stalk-set-save mantra that used to give me nightmares after long breakaway sessions. The advantage, and perhaps largest reason this technique has caught on is its ability to keep the goalkeeper upright, while allowing a maximum amount of the body’s surface area to obstruct the path between the ball and the goal. It also gives the goalkeeper the opportunity to save balls waist height and above with their hands while freeing the legs and feet to prove useful on low, hard, driven finishes. As field players in today’s game have grown in finishing finesse a la Messi and Christiano Ronaldo, it has forced the goalkeeper into becoming more savvy in their ability to stop a range of finishes from close range.

This extensive dialogue got me thinking about just how much the position has changed since I played it not so long ago, and even more from when said mentor played it. The position continues to evolve in so many ways as the rest of the game changes around it. As I was coming through the game from the youth levels on, the use of the goalkeeper’s feet was the trademark of the “modern goalkeeper.” We would spent countless hours on showing for and executing successful backpasses to help our team get out of pressure. At the time, goalkeepers with great feet were the way of the future and now it has become a necessity of the position at nearly all competitive levels.

I have heard arguments for a high starting position, an aggressive stance where the goalkeeper eliminates attacking threats before they happen by clearing balls with their feet. I have heard other coaches who argue that goalkeepers have the best chance to make the most number of saves by remaining close to their line and allowing for a greater amount of response time. I have heard coaches who believe that if a ball is not caught, the save is not nearly as successful, and others who have graduated to practically strictly parrying technique.

There have been an influx of opinions on everything from proper catching technique to proper diving technique, providing ample opportunity for debate and experimentation. Low dives in particular have started to morph as goalkeepers around the world are implementing a single-handed extension reach with a trap from the second hand versus a two-handed approach, as seen below. 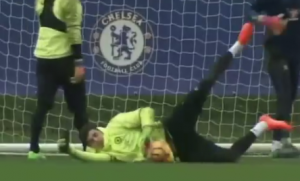 All-in-all, the arguments continue to rage. And as the tactical shop-talk persists among soccer circles, so does the evolution of the goalkeeper position and the “right way” to do it amongst the goalcreatures (as my boss so affectionately coins us).  As a former goalkeeper and now college goalkeeper coach, what I can tell you is this: there is no one singular answer as to how to play the position. I know that may sound like an obvious answer, but among GK circles this is not the popular answer. Many seem to have their way or the highway. But having coached a variety of ages and body types, what is consistent among the samples is that some things work for certain kids that don’t work for others. Some kids can fly while others have quick feet and make saves upright. Some are going to de Gea their way through their career with a multitude of saves using their feet and calves while others will have safer hands than that famous insurance provider. For every technical robot there will be an unconventional save-maker who gets the job done.

My point to all of this is that as the game changes, and as the position changes, it is important for us as educators of the position to stay alert to the modern trends and pay mind to the way others are playing and training their goalkeepers. At the end of the day, by opening our minds to certain techniques and offering those ideas to our goalkeepers we give them the opportunity to find what works for them. So even if I am not a master of the Joe Hart spread save, by introducing the technique to my goalkeepers, I may give them a tool that allows them to be the best that they can be. If I’ve learned anything, it’s that the only way we can hurt our GKs is by making them only do things our way and not allowing them to find what will be their style. Here’s to continuing to watch the position evolve, and to may shutouts ever abound.