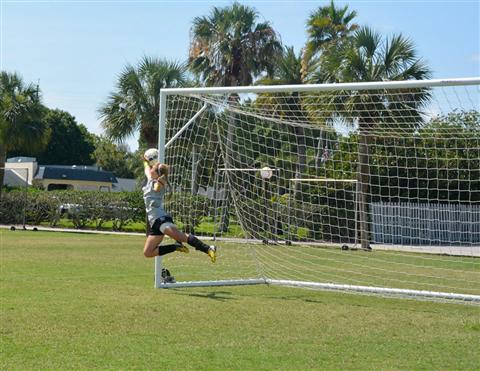 While both players shoulder their share of stress, the prevailing thought by managers, coaches, players and fans is that the shooter has most of the pressure because they are expected to score.
In a recent study by Geir Jordet of the Norwegian School of Sport Sciences this theory was investigated. His analysis of penalty kicks taken in the World Cup, The Euro and Champions League found that players generally underperform when pressure is at its greatest.  The popular perception appears to be reality; however, the reality goes much deeper.
Nearly 400 penalty kicks were analyzed and the results indicate that “players generally underperform when pressure peaks.” On high pressure penalty kicks where a miss will instantly produce a loss, players score only 55% of the time. Therefore, goalkeepers have a 45% success rate at this critical time. The results of this study also show that when the penalty kick will secure a win, the successful conversion rate is 95% for the shooter.
This difference is significant and can most surely be related to players

thinking about the outcome and dwelling on the consequences. A fear of failure may creep in and affect the performance in the must score situation.  This effect is prominent regardless of a player’s status, but has an incredibly negative effect on players of elite status. Examples are plentiful – Maradona, Platini, van Basten, Roberto Baggio all were soccer legends who got it wrong when it mattered the most.
There are a couple of other statistics about penalty kicks that are attention grabbers. According to this study “defenders generally score fewer goals in penalty shootouts (68%), compared to forwards (80%). This difference is higher, though, when we look at only the high-status players. The majority of high-status forwards maintains an average level of performance (73% goals), while high-status defenders flop and only score on 25% of their attempts.
The study also includes valuable information concerning the timing of taking penalty kicks as well as the results of celebrations. In thee situations, every little detail is a factor in the outcome.
The curriculum at No. 1 Soccer Camps integrates the latest findings uses studies like these to provide the best training for our campers. For the past 38 years, our program has included a detailed training session featuring an in depth analysis of the three types of penalty kicks and how to improve your chances to score if you are a striker and how to save them if you are the goalkeeper. With additional research and modern training methodologies, No.1 Soccer camps helps players increase their chances of delivering the winning penalty when it matters most and learning the inside secrets to successfully making the most important save of the year.
For more information on No. 1 Soccer Camps, visit our website at www.no1soccercamps.com