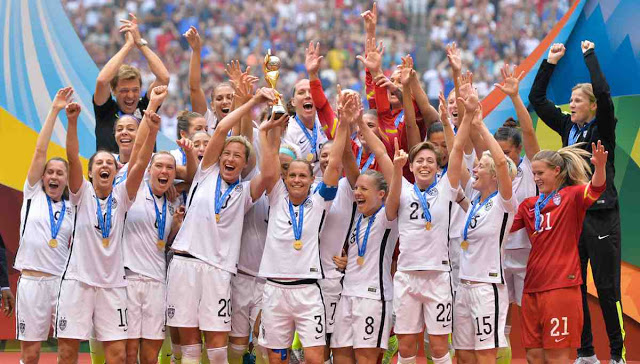 Along with the successes and celebrations surrounding the US Women’s National Team winning of the World Cup this week, there are many lessons to be learned for players, coaches, parents, and soccer enthusiasts. Mike Woitalla from Soccer America takes a closer look how unexpected set plays, a multidimensional back line, and coach who trusts her players can make all the difference.

Lessons from Jillellis and The U.S women

It’s wonderful that millions of aspiring players and coaches watched the Women’s World Cup final. Not because the USA won, but because how it won. Many aspects of the victory serve as excellent examples of how to play successful and entertaining soccer.

Play Low, Win High.
When Megan Rapinoe lined up to take a third-minute corner kick, everyone expected a high ball into the area. Instead, she drove a low ball that Carli Lloyd met eight yards out and shot into the net with the outside of her foot.

Not that low corner kicks will work all the time, but, besides demonstrating the value of executing the unexpected, the opening goal showed something crucial that’s often ignored by players and coaches — that well-aimed balls on the ground are harder to defend than crosses “whipped into the mixer.”
Lloyd’s second goal, just two minutes later, came from Lauren Holiday’s free kick on the flank. Again, it was a low-driven ball that the Japanese couldn’t handle.

The USA did get success in the air, such as Lloyd’s headed gamewinner in the quarterfinal victory over China, but high balls were a very small part of the U.S. game. The majority of its offensive success came from combination play on the ground — a wonderful example being the second goal of the semifinal win over Germany.

Savvy is Better than Brawn
That the U.S. four-player backline combined for just three fouls in final against Japan – and only 14 fouls total in the tournament’s seven games – reveals what kind of defenders Coach Jill Ellis fielded in Ali Krieger, Julie Johnston, Becky Sauerbrunn and Meghan Klingenberg. They used smarts, good positioning and good timing to stifle opponents.

Johnston may have been lucky to escape with a yellow card when she took down Germany’s Alexandra Popp in the semifinal, but that was one of only two fouls Johnston committed in 630 minutes of soccer.

All four players were more than comfortable with the ball at their feet, able to maintain possession after they won it, by being able to elude the first opponent who challenged them and hitting accurate passes of various ranges.

The outside backs surged forward with confidence and the central defenders didn’t just “clear” balls out, but aimed for teammates.

A major part of the USA’s success at World Cup came thanks to the backline — not just for its defending, but it because it was comprised of multidimensional players who also helped the offense improve from game to game.

Trust Your Players
Just imagine the pressure there was on U.S. coach Jill Ellis. The USA hadn’t won a World Cup since 1999 and anything other than first place in Canada would be considered a debacle.

But you would never have thought that Ellis was anything but confident in herself and her players when you saw her sitting on the bench during the final — or anytime during the tournament, even when the USA struggled to find its groove.

Once in a while, she would get up and convey an instruction — before returning to the bench. She wasn’t pacing, prowling and yelling from the sideline, but watching in way that made one feel she believed in her players.

I imagine when players see such positive body language from their coach it helps them keep the confidence that will get them through the high-pressure periods.

Coaches who behave with such dignity as Ellis does on the sideline — instead of bouncing around, gesticulating and screaming — look like coaches who know they’ve done well to prepare their teams and can trust their players at game time.

No. 1 Soccer Camps, the first national camp of it’s kind, was founded by Dr. Joseph Machnik in 1977. Since then, over 80,000 soccer players and coaches have attended No. 1 Soccer Camps. The former World Cup and professional soccer coach is credited for creating the “Machnik Method”, a distinctive soccer training method that is universally recognized and used today. For information on our camp or any of our 2015 nationwide sites, please visit our website at www.no1soccercamps.com.