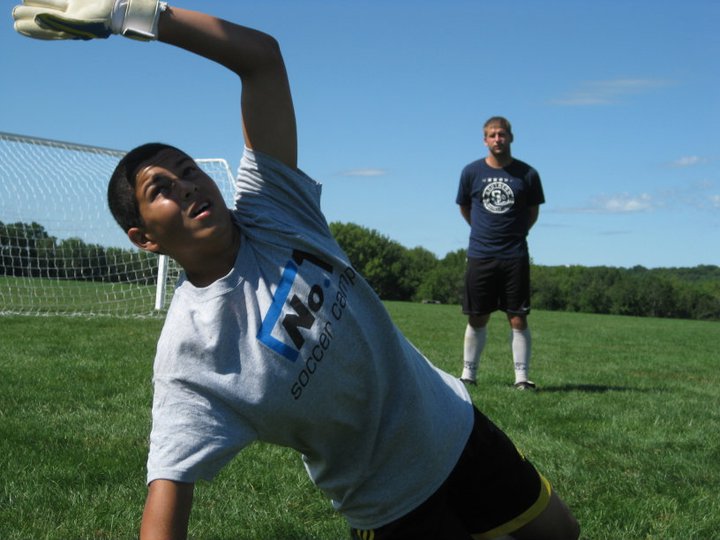 Get After It: Adjusting Technique And Training Mentality In Goalkeepers

This is the final installment of a three part series on training youth goalkeepers by No. 1 Soccer Camps’ Goalkeeper Director Mike Idland.

Technique First.  Let us consider the unbalanced goalkeepers discussed previously in terms of which is in better shape to move forward as a player.  The key factor here will be adjustments.

The highly-technical goalkeeper has quite a bit going for her.  First of all, her attempts at saves and her mistakes are going to be fairly uniform, as she tries to handle a given situation employing the proper technique almost every time.  Likewise, her successful saves are also going to look and feel alike for the same reason; thus, by imprinting those technical movements, the goalkeeper will develop great consistency on routine plays.  For these reasons, she is in a good position to make adjustments to solve problems or mistakes.  Her repetitions will have a “control,” like a scientific experiment, and she will be able to find the change that fixes the problem relatively easily so long as she is willing to change what she is doing, which is a definite consideration.

The play-making goalkeeper is a different story.  A coach will often find himself trying to help this keeper by first reviewing the correct technique for the given situation.  There is good reason for this.  Most would agree that part of the beauty of our game is that, because of its free-flowing nature, it is different every time.  Yet, there are patterns in the game that recur again and again, especially for the goalkeeper.  Clearly, the same patterns of play require the same patterns of response from the goalkeeper.  (i.e. It would make no sense to catch a shot at chest height using an overhand grip one time, and catch another shot at an identical height using an underhand grip at a different moment in the game.) So, based on this logic, the first adjustment for the play-making goalkeeper, when trying to work on a given situation giving her trouble, is actually to standardize the technique being employed and see where that leaves her.

So, when working with very young goalkeepers from scratch, the preference is to train them to technical perfection while helping them to problem solve situations tactically in the course of game play.

Training Mentality.  But there is something very specific to training and a 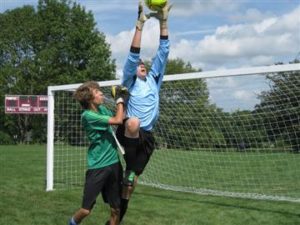 goalkeeper’s demeanor during training.  The training ground is where the goalkeeper becomes hard or soft; it is where the goalkeeper works out problems and imprints habits; and it is where the goalkeeper has the most candid and unrestricted exchange with the coach and other goalkeepers. Ideally, the majority of this attitude toward training is learned holistically through example – almost as if by osmosis.  Top end goalkeeper camps like No. 1 Soccer Camps Goalkeeper Camp are unique in their ability to provide this type of environment all day long for an extended period of time, during which a young player can literally live as a goalkeeper.  Often, they emerge a different player simply because they have learned, through direct exposure, the proper attitude toward training.  Nothing can replace this experience.

Hard work, a respect for the work being done, and general common sense will constitute a positive attitude toward training. Efficiency is a critical element for a goalkeeper’s approach to training.  Nothing should be wasted and everything should be maximized.  That is to say, the goalkeeper moves quickly from one activity to the next whether that be in between repetitions or simply jogging back onto the field after breaking for water.  She always returns the ball back to the server quickly and accurately and begins to focus on the next ball before the server has played it.  There is very little “down time.” Likewise, the goalkeeper shows up to training early and prepared.  She is fully and properly dressed and prepped in terms of initial stretching etc. before the session is scheduled to begin.  She works attentively until the session is through, is proactive in offering assistance in gathering up the training equipment being used on the field, and she takes the time to stretch afterwards as well as the care to properly pack her own equipment.  Everything about the goalkeeper’s effort, work rate, and attention should say, “I am here to train hard because I recognize it is important and I am happy to put the work in.”

When a group of goalkeepers are training together, there is a very special camaraderie that is unique to this type of group.  It is different from a team’s camaraderie because, in the end, each goalkeeper is concerned mostly with improving her own game; however, there is a certain spirit of collectivity and support for the fellow goalkeeper that should be apparent in the way that they relate to each other.  Hard work and big time saves should be acknowledged both when carried out by the players or, when applicable, demonstrated by the staff coach.  This creates a very positive atmosphere: spirits are high and goalkeepers are compelled toward excellence in performance both by their own internal motivation and by the appreciation and praise expressed by their peers. 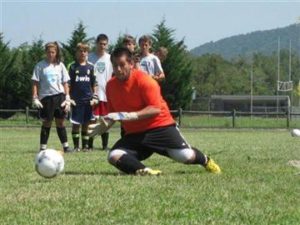 Work hard, but relax.  Often, when a young goalkeeper first “catches the bug” and wraps her head around a training ethic, she will over do it.  That is to say that she might work so hard that she becomes frantic and her performance suffers as a result.  There is nothing good about a frantic goalkeeper.  But, refining this youngster’s approach is not very difficult and it is fun to do!  The young player must learn to recognize the difference between a controlled high work rate and going crazy.  This is one of the elements of the goalkeeper’s training mentality that can be coached directly.  Again, the best way is by means of example.  A young, accomplished staff coach’s (or perhaps an older, more experienced player’s) demonstration paints the best picture here.  Put him in a training exercise and let him go to work.  As he is playing, point out to the young goalkeeper how controlled his movement is.  He is always focused.  His feet, for example, are always precise in their movement and set at the right times.  Yet, he is always pushing the pace at which the training moves: making saves and bouncing right back up for more; returning balls accurately and swiftly to the server; playing just a bit faster than the serve so as to ask the server to test him more on the next one.  These traits are the embodiment of the very valuable lesson to work hard, but relax.

Pride.  The goalkeeper must take pride in all that she does before, during, and after training.  Does her appearance represent her as the goalkeeper she wants to be recognized as? Does the effort and work rate in a given training session do the same? Does the goalkeeper behave in a manner during play and away from the field that she knows her goalkeeper coach would be proud of? When the goalkeeper can answer each of these positively, she is arriving at a mentality that is healthy for her own development.  Right around this time, the goalkeeper’s mentality will usually begin manifesting itself in terms of poised, comfortable, confident, and consistent play in games.

Understanding the complexities and idiosyncrasies of a young goalkeeper’s mentality are, no doubt, important for the coach who has taken on the project of developing the keeper.  However, the point I would emphasize most for the coach undertaking this challenge is patience.  Developing a well-balanced and mentally strong goalkeeper is most definitely a long-term project.  In a sense, we are asking the goalkeeper to become an expert in a particular philosophy, versed in all of its tenets and familiar with how they are applied.  This will be a process of verbalization, of hands-on experimentation, of environmental manipulation, and of repetition.  The goalkeeper coach must work in the capacity of a guide for the youngster, rather than an authoritarian in order for the goalkeeper to develop an intrinsic embrace of a training mentality.  This goalkeeper, then, will carry herself – will act – like a goalkeeper simply because it is the right way to be, not for anybody else, but for herself.

Also by Mike Idland: Understanding The Youth Goalkeeper Mentality (Pt. 1), Mistake Management and Troubleshooting for Goalkeepers (Pt. 2) and Out Of Your Mind Breakaways (2014)