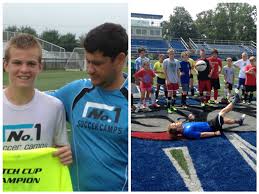 No. 1 Soccer Camps sits down with our College Prep Director Eddie De Souza and talks about his coaching philosophy, influences and style of play.

No. 1: What is your goal each week at camp when working with young American soccer players?
Coach Eddie: The American players have two characteristics that attract me as a coach: mind set and dedication. Those two qualities motivate me as an Educator. My goal is always to instigate passion and love for this game. My priority is to teach confidence – it will bring freedom and consequentially unpredictability to the game. Players are the ones making decisions on the field; they are playing the game. To become better, repetition is necessary, technical aspects need to be performed over and over. In addition, I like to add pressure to almost every session; the game is about solving problems under pressure. Finally, I am a true believer that the more you play this game, the better you will become and of course incorporating the basics: passion, dedication, confidence and talent helps players achieve this.
No. 1: As a former professional player and coach from Brazil, who were some of the Brazilian greats who influenced your coaching philosophy?
Coach Eddie: Tele Santana (former Brazilian National team player -World Cup 1982 in Spain and 1986 in Mexico – and coach at Sao Paulo football Club) has been my biggest influence. His ability to read the game and his style of football is the one I most admire. Santana was one of the first coaches in Brazil to “print” the Brazilian methodology: 1. ball on the ground; 2. minimize touches; 3. diagonal penetrations and passes constantly switching the point of attack; and finally 4. “freedom and creativity” especially in the final third. I grew up watching Zico, Socrates, Falcao, Eder, Junior, Leandro, and Cerezo.
Luis Felipe Scolari (current National team coach and World Cup winner 2002), I would say is my second choice, especially for his way of motivating, engaging and helping his players buy into “ the family”. I too believe it is crucial for a team to respect the coach and admire each other for their strengths. Scolari is from my state back in Brazil. He was a head coach at Gremio Football Club which was the first team I played for at the U-17. I had a chance to meet him and hear his speeches about football several times when I was a player and later when I became a coach. He definitely has a combination of being aggressive and at the same time kind and soft with the players that makes him so respected.
Coach Eddie De Souza is No. 1 Soccer Camps College Prep Director at our Salisbury and West Conn sites and is Striker Director at our Urbana location.  In addition, Eddie also coaches ODP in Virginia and is Assistant Coach at Longwood College.