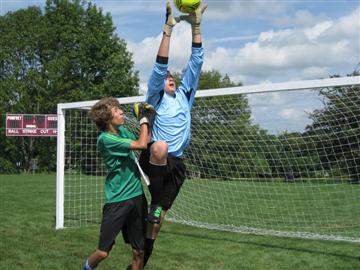 Get After It: Understanding And Engendering The Youth Goalkeepers Mentality

By Mike Idland, for No.1 Soccer Camps 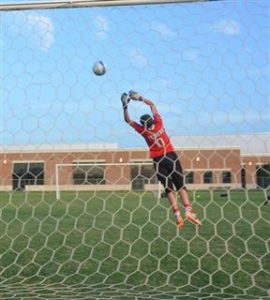 mentality,” and this would not be incorrect. But, the goalkeeper’s approach, her focus, extends so far beyond training that the term “training” seems to limit the psyche unjustly.  In a sense, the goalkeeper almost has a governing philosophy or a world view.  We can say of many great goalkeepers – whether at the youth or senior levels – that “she carries herself like a goalkeeper,” or, “you can just tell she is a goalkeeper.” Why is that? Why is it that the good ones act like goalkeepers even when they are not practicing their craft on the field of play?

The factors that lead goalkeepers to act the way they do could be explored to infinite depths, but we might start by taking a look at the basic nature of the position the goalkeeper occupies within the context of the team and the game.

It can be lonely back there.
True, the more a goalkeeper develops, the more incorporated into the team shape and operation she becomes (especially on attack), but initially the goalkeeper is stranded on an island that is about 6’ by 8’ – roughly the size of a prison cell! The young goalkeeper often will feel detached from the team’s offensive successes and solely responsible for the team’s goals against.  This is just the nature of the position when the game is played at a very elementary and unorganized level, and that is why almost nobody wants to play in goal at that level.

It is partially up to the coach to frame the position for young players better than that, but it is just as much – if not more so – up to the player to recognize her calling to play in goal.  The nature of the position of goalkeeper actually appeals to a small minority of players.  At the youngest ages, this will happen on two basic levels: the youngster will either recognize the opportunity to shine from this unique position, or the child will see in this position an opportunity to “hide from the game.” This second type of goalkeeper is useless, especially in today’s game.  A good coach will talk with this player and challenge her to excel from the goalkeeper position, but if the child refuses to take on the challenge and persists in being meek, she must be removed from the position, as it does not help her, her teammates, or the game in general.

In other words, the goalkeeper must want to be there.  Thus, we can lay bare perhaps the most essential quality of a goalkeeper’s mentality: the goalkeeper is one who takes on challenges single-handedly and thrives on the opportunity to do so.  It can be lonely back there, yes, but the true goalkeeper (even at the youngest ages) will transform socially the perception of this position from one that players wish to avoid into one of which they are envious. 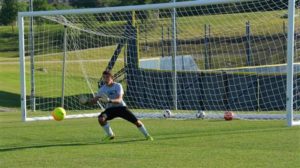 Goalkeepers are often named captains of the team – why? Is leadership somehow endemic to the position?
Yes and no.  Because of the isolation or “on stage” factor and because the goalkeeper is the one to whom the team turns to “bail them out,” leadership is built into the position in some sense.  However, as any experienced coach or player will tell you, not all goalkeepers are leaders.  So, there is something more to it than that.

The confident goalkeeper who faces challenges head on is, in a way, a microcosm of what a serious team aspires to be.  Here we have a player whose every touch is under pressure and whose best performance is the ultimate effort “not to lose.” (Now, this is different from the effort “to win,” though the two are very closely related.) The only way for the goalkeeper to succeed at this effort is to work tirelessly when called upon.  She can take no “time off” because doing so equals certain goals against.  So, it is only natural for the team and the coach to warm to this player and model their collective attitude after hers.  The team tries to embody the same tireless work ethic and “refuse to lose” demeanor the goalkeeper exhibits. 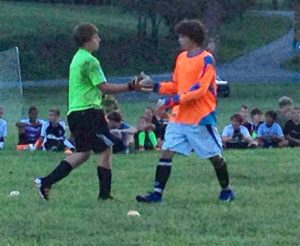 The thing is that the goalkeeper rarely does anything without the attention of the team and coach on her.  So, if she is to succeed in the context of the team, she must wear her heart on her sleeve and handle any of the above situations and the countless others that may arise with the utmost poise.  When the team trusts the goalkeeper (and there must be trust between the goalkeeper and the team if there is to be success), they will often model their own demeanor after how the goalkeeper reacts to key moments.  That is to say, if the goalkeeper is confident and composed at a critical moment, then the team is likely to be confident and composed.  If the goalkeeper is panicked and defeated at this moment, then the team may lose heart.  For some goalkeepers, the feeling is that this is an unfair element to goalkeeping; they would rather just go about their business quietly, blending in, with no more or no less responsibility than any other player on the team.  But, the thing is the goalkeeper occupies a position that is different from the other players.  And with this position comes what has elsewhere been termed the burden of responsibility.  In other words, like it or not, the goalkeeper will be looked to as an example by the team and the coach.

“What’s the message?”
This is one of the phrases I use most when coaching my goalkeepers in regard to mentality and poise.  It is very important to me that they understand the coded messages they send mostly with their body language, but also with their words and their play.  The goalkeeper, like anyone else, is always saying something by the way in which she is standing, the spirit with which she plays, and the words she chooses.  This message can be positive, negative, or anything in between.  And the team will receive it.

If you have a goalkeeper who has not considered this yet, but who is looked to as a leader by your team, watch closely the next time he or she concedes a goal at a crucial moment in the game.  First, take note of how many of the players on the field turn their attention, if only briefly, to the goalkeeper immediately following the goal.  Then, assess what the goalkeeper’s body language is projecting.  Is it confidence? Is it defeat? Hopelessness? Indifference? You will be able to decipher the message, and so can your players. This is perhaps the most important moment for the goalkeeper to be aware of her body language.  Why?

The team suffers a psychological blow after conceding a goal.  Collectively, they have failed and they feel that.  Teams with a good understanding of the game will not necessarily blame the goalkeeper for the goal, as most goals are a result of several players’ errors.  However, the team will hold the goalkeeper responsible for the ones she “should have” saved, and rightly so.  So, how does the goalkeeper send the right message to her team at this critical moment?

A great goalkeeper coach once told me, “a lot of this job is acting.”
He was right!  He was, of course, referring to the degree of theater the goalkeeper coach must employ to effectively get through to the keepers regardless of his “natural personality.” But, the same principle holds true for the player trying to get across to her team.  Every goalkeeper is different and some have a tougher time stomaching goals against than others.  At the youth levels, you will see everything from the goalkeeper who beats herself up over a goal against to the goalkeeper who seems entirely unaffected.  Neither extreme is good.  The team must see that their keeper cares, but they must not see that their goalkeeper is defeated or has lost her mind!

A little bit of anger is okay; it comes very naturally to most serious goalkeepers, and it is good for the team to see some steam coming out of the keeper’s ears once in a while, but the keeper should be mindful of the proverbial explosion after a goal against.  For some keepers, this manifests itself physically as they assault the goalpost, punch the ground or even themselves, or punt the ball a mile up the field.  Well, what is the message here? It certainly is not a message that suggests the keeper or her team is in control of what is going on.  For other goalkeepers, the explosion comes in the form of a tirade directed at the nearest defender, letting her know how at fault she is.  This is anger displacement and may function to make the keeper feel better, but it is certainly not healthy for the team and it is not going to go very far in terms of nurturing the important relationship between the goalkeeper and the defenders.  Criticizing a teammate has its place, but the timing and delivery must be taken into consideration.

Caring, determination, and conviction are the ideas the goalkeeper should try to convey following a goal against.  It is okay if the players see that the goal hit you in the heart because that shows them how much you care.  So, the facial expressions of disappointment or controlled anger are okay momentarily so long as they are kept under control.  But, at the same time, that grit and competitiveness must return to the keeper’s eyes and overall countenance while the team’s attention is still on her.  They must look back there and believe they can still do it!

Communication
Often a goalkeeper’s communication will disappear immediately following a goal against.  It is hard to say exactly why this happens, but it tends to have something to do with feelings of accountability.  i.e. who am I to be bossing these players around right now, if I can’t even keep the ball out of my own net? This sentiment is understandable.  But, the coach must have a discussion with the keeper to make sure it is understood that effective communication from her to her teammates is part of keeping the ball out of the net, and it must continue after a goal against in order to prevent the same thing from happening again.  A momentary lapse might be okay, as the players will pick up on the keeper’s ownership of the goal, but as soon as there is defensive organizing to be done, the goalkeeper must go back to work with the communication.  Next Installment: Mistake Management

Also by Mike Idland: Out Of Your Mind Breakaways