Become the best striker you can be 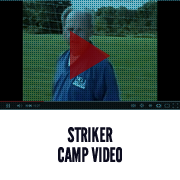 We call it the No. 1 Field Playes Camp, because we train all positions, all players will benefit from the “Go to Goal: curriculum which concentrates on play in the final third of the field on either side of the ball.

Each camper will learn to attack and defend the various tactical situations which challenge the complete player in today’s all inclusive modern game. Attackers defend and defenders attack with over 1,000 “Go to Goal” opportunities in a typical camp week.

Learn the various techniques and strategies in placement and long range shooting, near and far post runs, bicycle kicks and more.

Become a top goal scorer! Learn to defend and come forward to take advantage of goal scoring situations at free kicks and corners. Hone your penalty kick skills. Become the No. 1 player on your team.

Among the topics which are included in the No.1 Striker Camp program at the various levels are:

© 2023 Copyright by No1soccercamps. All rights reserved. Powered by